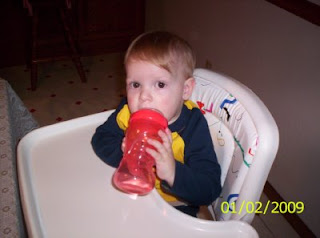 I wanted to share with everyone the experience of my son getting tubes, since I know that many parents go through the same thing and wonder what goes on.

A little background: L has had 3 or 4 ear infections in his one year of life, which alerts the pediatrician that he could need tubes. Also, he is very resistant to most antibiotics and he has been on several in his bouts with the infections, from amoxicillin to omnicef, to a dicontinued medication, to an antibiotic injection in the leg. I did not want to submit my poor little guy to any kind of surgery, but after being directed to an ear, nose and throat doctor. He recommended the tubes and said that it would help prevent future ear infections, make them easier to treat and that chronic ear infections/excess fluid in the ear can lead to hearing loss. So, Nick and I decided it was best.

The actual procedure is called Myringotomy with Tube Placement. Myringo= tympanic membrane: -tomy= a cutting operation. "This procedure involves making a small hole in the eardrum to remove fluid. A small tube is then inserted in the hole to maintain ventilation. This procedure is often required in childhood due to an immaturity of the eustachian tube that connects the ear to the back of the nose." (From the info the doctor's office gave me.) Also, interesting is that it says that exposure to colds, viruses and secondhand smoke contribute to ear infections. Also, a child that lies on their back while drinking a bottle is at an increase risk. Did not know, they didn't apply to L, but interesting none the less.

So, Thursday I woke up at 5 am in order to be to the hospital (next town over as our town is not know for its great doctors) by 6:30. We were shown to the surgicenter and put in a cubicle type deal with a curtain. I changed L into a hospital shirt and pants and left his diaper and socks on. Oh, that day it was -15 when I woke up. The nurses checked his vitals, the anesthesiologist came and spoke to me about his part and then the doctor came to speak with me and brought a stuffed animal for L. We waited our turn and they took L from me to the procedure room. Parents are not allowed in, you must wait until they bring them back. He was given gas to knock him out and the procedure itself lasts about 5 minutes. When they brought him back to me, he was quite fussy. Usually they keep them longer, but told me he came out of it quicker than normal and was fighting them, so they thought it best to bring him back. He quickly chugged two sippy cups of juice and after 20 minutes fell asleep on me. We left the hospital around 9am.

Upon arriving home, he was grouchy for a couple hours- they said he would be because his ears would pop and adjust for a bit. Then he took a looooooooong nap and after waking up, was back to him old self and has been since! It was not scary and he did very well!

I went by myself, but was fortunate the child after him was a family that I knew and we chit chatted to pass time.

Well, hope this helps anyone who was curious about tubes and if you have any questions, ask away! Oh, and the following day, I got a call from the doctor's office, the surgicenter AND the anesthesiologist all asking me how he was doing and if I had any questions- very nice!