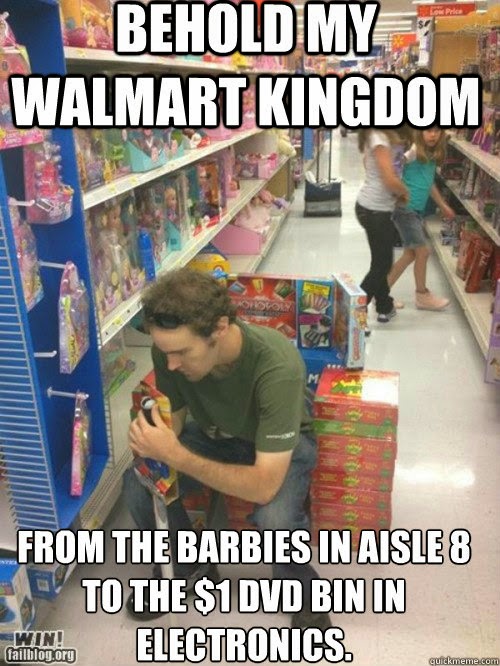 I'm sure everyone (and I mean EVERYONE) who shops at Walmart has run into this problem before: you go in to buy one thing and end up coming out having spent $100.  It happens to the best of us.  And if you're like the other 99% of the country, you're not rich, so that $100 would probably have been better spent elsewhere.  Dang Walmart for having so much stuff that we think we need, but we actually want (don't we always need neon colored socks)!

Well, I have found myself a solution, and perhaps it will work for you as well.  Every pay day, I make a list of the necessities I have that are cheapest from Walmart.  This could be things like laundry detergent, baby wipes, diapers, dish washing detergent, etc.  Then there might be things I wanted to look for at Walmart, but can get online from them, such as my son's birthday is coming up and I wanted to see what Monsters University things they had, so I ended up ordering him a blanket.  By ordering these things online, I avoid going in the actual store.  I save time, don't have to encounter the dreaded "people of Walmart," and avoid being tempted by the non-essentials on the end caps that always seem to catch my eye.  (Sure, a bottle of soap refill for $2.88 sounds like something I should buy today!)

And I know you have some questions.  What about the cost of shipping?  Oh, ho ho, My Friend.  If I spend over $50, the shipping is free.  And many of those necessities come in bigger sizes online.  For instance, I can buy bigger boxes of diaper than what they sell in the store, which means they are less cents per diaper and last me longer.  And spending over $50 on those things would have happened anyway, but now I have stocked up until the next paycheck (and much longer on some items.)

Of course, there are some things here and there that aren't available online, but I can usually get just as cheap, if not cheaper at the grocery store a block from my house.  Generally pet food and litter are cheaper at chain grocery stores anyway.

Oh, another good point for me is that I don't have a Walmart in my town, but there is one where my ex and my parents live, so I am usually there every two weeks anyway.

Well, there you have it!  Try it and see if it helps you.  But if you're one of those few people who can actually go to Walmart with a list and no temptation, congratulations!  I don't have that kind of willpower.