The Plight of the Adjunct 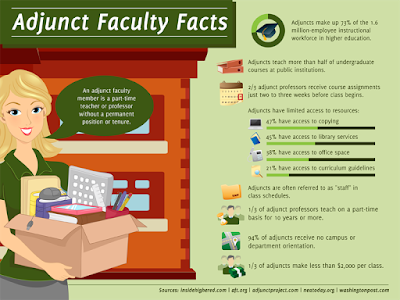 
I would love to teach full-time at either of the schools I work for- moreso the community college in my current city.  However, as any employed adjunct would tell you, getting a full-time gig is almost as likely as winning the lottery or getting struck by lightning.  In 2011, I got my first adjunct job at a very small community college and the dean that hired me specifically told me that the job didn't pay well and I wasn't likely to get full-time.

Why is full-time such an out-of-reach option: because the schools don't want to pay benefits.  Most states have laws about teaching and even specifically at the post-secondary level.  Adjuncts are not allowed to teach more than 5 classes in an academic year and that can only be 2 fall, 3 spring, or 3 fall and 2 spring.  (Summer doesn't count for some reason, but those classes are always snagged by full-timers.)  If the school wants an adjunct to work more than that, they have to hire them full-time... and pay benefits.  So if you understand economics, it is more lucrative to have 80 adjuncts and 5 full-time than 20 full-time.  And those numbers are pretty accurate.  At the college I work for, full-time openings only happen when someone retires.  No one gets fired, no matter how much students complain or how poor their performance is.  When that person retires, an internal transfer notice is posted.  If no one takes it, the opening goes public.  That's when the school gets inundated with applications from all those people with PhDs and Masters in subjects other than business.  People whose "fall back" option is to teach because the jobs they want don't exist.

I have worked with my current community college for five years.  In that time, there's been one opening for full-time in the subject I teach.  I applied (and nailed that application IMO) and received an email a month later saying that they had "more qualified" applicants.  Wait, what?  What makes them more qualified?  I already teach for you!  My friend, a fellow adjunct with the same plights, made this analogy:  telling you that you're good enough to teach for them, just not full-time is like telling someone they're good enough to sleep with, but not marry.  It stings just the same!  Both scenarios equate us to cows giving away our milk for free.

Another friend of mine went to City College in San Francisco.  She said that one of her favorite professors was an adjunct.  The professor had a PhD that was bankrolled by NASA.  She couldn't get hired on full-time and because she needed benefits, she eventually had to leave the school and find work elsewhere.  How is THAT woman not qualified enough for full-time??  It seems like she'd be someone that the school could highlight as a selling point.  I ain't got no fancy NASA edumacation, but I have great rapport with students, love what I do, have enthusiasm in the subjects I teach, and get like 99% positive feedback from students (you can't please everyone all the time)!  I actually went to school with the intention of being a community college instructor!  It's not a fall back career.

Now I want to address the "plight" aspect of being an adjunct.  Based solely on being an adjunct for one school, a single person qualifies for government assistance.   In order to make a living, we have to teach at multiple schools at the same time or have another part-time job or two on the side.  There have been a couple excellent articles written about this same topic for decades.  One such was written in the NY Times in 2007.  I'd like to quote a response/opinion that someone wrote in for this article.  She said:


"In my experience, teaching college in New York City, 70 to 80 percent of professors teach on an adjunct basis — with no health care, retirement benefits or job security. I have taught six courses at three colleges in one semester. I have been scheduled to teach courses that were taken from me the night before a class was to begin, because a tenured faculty member’s class failed to fill. I have developed courses, only to see a tenured person teach my course" (Goldin 2007).

I absolutely feel her pain.  I have had classes taken away from me a week before the semester starts.  Last year I was offered my first summer class.  I have four kids, so had made arrangements for the younger two for those 8 weeks.  It was a lot of stress, but I wanted the income and to show my flexibility.  The WEEK before class started, they gave it to a full-time instructor because her class didn't meet minimum enrollment.  This has happened to me about four times in the past five years, but this was particularly frustrating because I had made childcare arrangements and was counting on the income during the summer months.

Lastly, I would like to mention something that I'm sure is less common amongst adjuncts and is very personal in nature (thankfully this blog is hip hop anonymous).  Two years ago I was sexually harassed by a student in one of my classes.  There were only three weeks left of the semester.  Without getting into details, he sent me a series of text messages over two days that made me extremely uncomfortable and were highly inappropriate.  I only shared these with my husband and a fellow adjunct (mentioned above).  They both thought I should turn the student in to SOMEONE.  I knew that it was completely unacceptable student conduct and that he deserved some type of consequence... but then reality sunk in.  I'm just an adjunct.  I'm replaceable by anyone with a pulse and the right diploma.  I don't even know my boss.  No one there has any personal connection to me.  What if the student is always right?  His tuition is probably worth more to them than someone that can be easily replaced by 100 other people.  So I didn't tell anyone.  I made it clear he wasn't allowed to speak to me about anything other than classwork.  I avoided being near him.  Since that class ended, I never stay in the classroom if there is only one person left.  I have seen that student in the hall once since and I jumped into the nearest bathroom and froze.  Thankfully, since most students are only there for two years, he won't be there this fall.  I shouldn't have to have "let it slide."  I shouldn't have to feel like I'm the bad person in this scenario... but that's how I feel.  As an adjunct, NO ONE CARES.

I LOVE my job.  I deserve to be treated better, but because I love my job, I have to suck it up and continue on the same path.  I am more fortunate than many of my coworkers because I'm married to someone that can put me on his health insurance- otherwise, I would have to give up on a job I love or spend half my income on my monthly doctor visits and prescriptions.  I am also fortunate that my kids are now old enough not to need childcare because they are all in school all day.  So who picks up the slack for adjuncts that want to teach for a living?  If you're single, the government can/will pick up the slack.  If you're not, hopefully you're lucky enough that your significant other can throw you a bone.  But hey, maybe one day I'll win the lottery and being a lowly adjunct won't be so hard.

If you'd like to read more on this topic, I've got two articles to share that are fantastic!
‘It keeps you nice and disposable’: The plight of adjunct professors
Decline of the Tenure Track Raises Concerns