How to Kill a Pacifier and Get Away With It 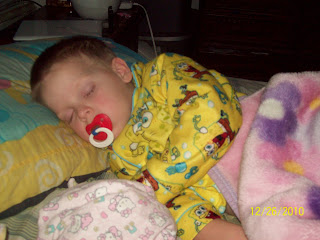 Okay, so my son is 3 and still has a pacifier *insert judgement here*.  I have tried sticker charts, begging, pleading to get him to give up his pacifier.  He also has blankies.  I'm okay with the blankies, but not the pacifier.  And sure, I could take it from him and watch him cry,  but I'm a pushover mom about some things and I think deep down I wish I could still use a pacifier for self-soothing.

So, today I am trying Plan L.  L is for Leprechaun.  I took all the pacifiers and hid them away in a high cabinet and told my son that a leprechaun snuck into the house and stole all his pacifiers.  Reason being is that leprechauns don't like seeing big kids with pacifiers so they steal them.  Will it work?  Hopefully.  He hasn't asked about it since, but when he starts crying and sobbingly says, "PASSY" I am hoping I have the willpower to stick to my guns.

Next step is getting his dad and grandparents on board.  I think his dad will go along with it, but the grandparents are bigger pushovers than I am.

Did anyone else have a similar problem with their toddlers or teenagers, lol?  I will keep you updated on if I am successful or not.
at 2:29 PM 4 comments:

Bear with me. This is my first attempt to blog from my Blackberry. My netbook is being viciously attacked by worms and malware, so I'm out of commission until my new Norton 2011 comes in the mail. There's nothing really exciting to talk about. I'm just lying around watching season one of The Walking Dead. It's rather good, but extremely gory!

This week was spring break at my daughter's school, so the kids went to their dad's for the week. This is the longest I've ever been away from them and it is hard. I see their toys and walk by their room and I miss them. I have been doing some MAJOR spring cleaning. It's so much easier to do in a townhouse than an old farmhouse! I cleaned the kids' room, changed sheets, vacuumed, dusted, the whole nine yards. I get to have them back tomorrow and I can't wait!!

Only other thing on my mind is this "friend" I have that refuses to speak to me. I don't want to seem like a crazy stalker trying to get them to talk to me, but at the same time I don't want to give up and just have them never speak to me again. I don't think I remember this ever happening and I never would have expected this from them. It hurts.

Anyway, that's it for this pointless post. Have a great weekend!!
at 8:03 AM 2 comments: 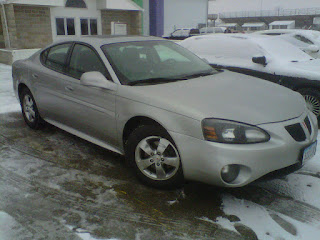 This is my first Music Monday doing a local band, but now that I don't live in a dinky little town (lay off the Iowa jokes!) I have the opportunity to experience actual good live bands from time to time.  Anyway, saw this band Saturday night and they were great!  I'm not usually a fan of the screaming, but with the look, feel and sound, it all worked.  They are working on their first album and seem to get a lot of gigs around the state, so... good luck to them!  Check them out on Facebook as well.  And if you like them, tell them I sent you because I plan to bill them for the publicity... woot!

I'm the demon on your shoulder
that the devil never sent
I'm the elusive white rabbit
you will never ever catch
Take a chance,
play your cards...
See where the moon light hits
Whether you remember my name
or the face that loomed before you
The whisper on your cheek,
the hair that brushed your skin...
I will haunt you in your wakefulness
and elude your fantasies
for I am what you always wanted
but are never able to have.
Don't say I didn't warn you.
at 4:32 PM No comments:

I Foresee a Return of the Bubonic Plague

I know this isn't any kind of new idea, but I was reminded of it the other day when a friend was sick...

What is the deal with employers who expect their employees to come to work and infect everyone else?  Why do they make it so hard for employees to be sick.  Case in point, my friend is a waitress and apparently if you do not have a doctor's note, you receive a warning.  Second occurrence receives a week suspension and third offense is termination.

I don't know about the rest of you rich Americans, but going to a doctor can be costly- especially if you don't have insurance.  So, not only are you losing out on that day of pay (because if you're like the average joe schmo on the street, you don't get paid sick days), you are expected to pay out of pocket for a doctor to tell you that you have a virus and you have to wait it out.

I once worked at a pizza restaurant (we shall call it Pizza Hot).  In order to call-in sick, you were given a list of people to call and see if they could work for you.  If you couldn't find a replacement, you were expected to come to work.  Oh, wouldn't all the patrons love to know that their food is being handled by someone with explosive diarrhea?  I was making a pizza one day and my coworker sneezed on the make table and I literally saw snotties fly into the ingredients... yeah, you heard me.  Ew.

And what about places like Thomas Cardella (telemarketers)?  They are such nazis that sure you can call in sick, but if you call in sick you lose your "attendance bonus" for an ENTIRE paycheck.  That means instead of your hourly rate of 9 or 10 bucks an hour, you receive $7.50 an hour for an entire 2 weeks.  Doesn't matter if you were sick once or three times.  Of course, if you are sick, you accumulate these points that inevitably lead to you getting terminated.  I don't know if they accept doctor's notes, but pretty sure they don't.  Employees will throw up in the trash can next to their call desk just so they can avoid losing money when they go home.

Does anyone wonder why the average man finds himself stressed, depressed and at the end of his rope?  Maybe it's because these multi billion dollar companies think it's okay to treat their employees like dirt.  Even small businesses see their employees as cattle that can be replaced at a moment's notice.

I understand the idea that some people abuse their sick leave and call-in just because they don't want to be there.  But, unless someone has a habit of it, don't be a jerk.  People get sick.  Shock, shock- you're gonna end up with even more sick employees and some sick patrons because of your dictatorship ways... ugh, ugh and triple ugh.  I hate when the little people get oppressed by the man!
at 4:20 PM 2 comments: