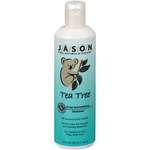 How can a cute little girl be filled with yucky stuff, lol? I was going to blog the other day about the dandruff thing, but after today thought I'd share the ear wax story too.

My 3 year old, A has super dry skin. The poor kid has had it since pretty much birth and I lotion her up constantly and also have prescription strength cream for the worst spots. Anyway, I noticed right before Christmas that she was getting quite a bit of dandruff and with the static going nuts and making her hair poof out, the dandruff seemed prominent. I also didn't know what lice looked like, so I was a little freaked that it was lice, but it wasn't. So, I googled the heck outta dandruff and children and found that several places recommended shampoo with tea tree oil. It is also supposed to be good for warding off lice, which would be an added bonus since she goes to daycare. Anyway, I bought Jason Scalp Normalizing shampoo with tea tree oil from WalMart and it is working! Her hair looks shinier AND has less dandruff- I'm sold. And it was very inexpensive as well.

Onto the ear wax. (Is it one word or two?) You're probably thinking my kid is some kind of stinky mutant right now, but I swear she's a doll, lol! So I took her to the doctor today to check her ears because she's been hard of hearing for a couple weeks, ran a temp and said her ear hurt. Well, I use Debrox and peroxide/water combo and try to clean her ears every couple weeks, but they were jam packed! The nurse spent OVER AN HOUR cleaning out one ear and still didn't get it all. In the meantime, A was crying and in pain and it broke my heart! She was prescribed drops that are antibiotics and should help loosen up the wax that is left. The ped. said that there is nothing you can do to get her to produce less wax and said there's nothing I can do differently to clean them out either, so I pity my poor wax packed daughter.

Well, now that I've grossed you out and embarrassed my daughter's future self, I'll end this. I am hoping that it sheds some light to parents that may have similar issues.