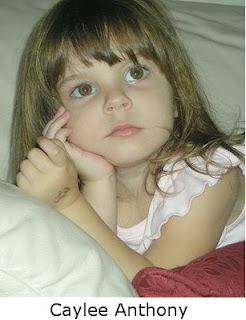 I'm sure most of you have heard the story about Caylee Anthony.

She was a 3 year old (would have been 3 in August) girl whose mother reported her missing after a month. Recently her remains were found less than a mile from the home where she had lived with her mother and grandparents.

As a mom of a 3 year old girl, I find this case especially sad. I'm sure everyone has theories on what happened, but my theory is that the mother wanted to go out clubbing and the grandparents said they wouldn't watch Caylee because they didn't want their daughter going out. So, she told the grandparents she was going somewhere else and spending the night with Caylee there and instead chloroformed her and stuffed her in the trunk, where Caylee died from either poisoning or the struggle to get out, etc.

What still confuses me, though, is why the grandparents would wait a month to alert authorities that her granddaughter was missing. They all lived in the same home, and wouldn't they want to know what happened to her? It seems especially fishy in that regard. I wonder if Casey (the daughter) told her mother originally what happened or if she lied and kept dragging her mother through a web of lies.

No matter what happened, it is appalling that a beautiful little girl would have to die because her mother didn't love her enough to keep her alive. It is unfortunate that there are so many people out there who are desperate to have kids, yet you have deadbeat parents who will risk their children's health to go out.