No More I Love Yous? 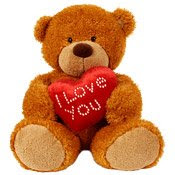 Have you ever thought about the simple phrase, "I love you?"

Parents generally say it to their children, spouses, significant others, partners say it to each other, grandparents and so on.

But why do people STOP saying it? Is there some magic number that some parents feel it is time to stop telling their children? I try to tell my children more than once a day. Affection doesn't come naturally to me, so I had to make it become a habit because I wanted my kids to grow up in a very nurturing environment. I can't recall when my own parents stopped saying it to me, but they did. Am I any worse for it? I don't feel so, but who doesn't like hearing that they are loved?

On the other hand, what about the parents who tell their children they love them all the time, but have funny ways of showing it. Do their words count for more than their actions? As an adult, the awkward feeling of hearing a parent whom you have lost all trust for tell you that they love you, feels almost painful.

And then there are spouses. My husband and I were those crazy gaga people when we first met that thought that love conquered all and that poo smelled more like roses just because we were in love. Well, we've long since passed that phase! The "I love yous" get fewer and more far between with each year that passes. I often listen to the end of people's phone calls to their partners and wait to hear the closing. You can always tell whether it's a new relationship or not by how exuberantly the closing is stated. And it always seems as though you don't hear "I love you" at the end if it's a couple whose been together awhile.

It's a sad state of affairs when people just assume that someone else knows they love them and that it is no longer necessary to say it. And who doesn't like hearing those words? So, as you're kissing your children goodbye or tucking them in at night, or as you're waving to your spouse before work in the morning, perhaps take the time to say "I love you." And if you say it enough, it just might become a habit.
at 3:38 PM

Email ThisBlogThis!Share to TwitterShare to FacebookShare to Pinterest
Labels: A, i love you, L, love, relationships