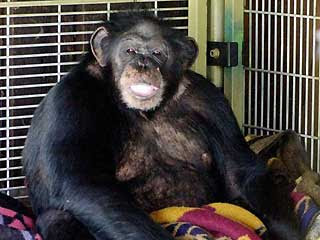 Okay, so this isn't technically mommy news, but pets can feel like children, so there is my justification of why this qualifies.

It also isn't completely new of a story, as it happened Monday. The story is about a 14 year old chimp named Travis (pictured) who attacked his owner's friend and almost killed her. The otherwise friendly chimp had been raised by his owner, Sandra Harold, and they were very closely bonded. Travis seemed extremely intelligent and had even appeared in commercials before.

It is a sad story because it just shows that despite all the love that you are giving your pets, some animals are just not meant to be domestic. Their brains don't function as ours do and at some point their instincts kick in and they resort to their primal behaviors.

Travis ended up being shot and killed by police after a stand-off situation. Bad news all around and the victim is still in critical condition.