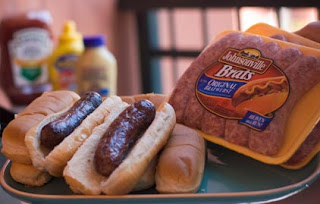 To you wonderful makers of the world's best brats, I have two key points to make, so please read all the way through.

First and foremost come the compliments! You have perfected the art of the brat in a way that can not be touched. Other brands pale in comparison to the mingling of delightful flavors that you have encapsulated in your meaty links. In fact, just yesterday I was saddened when at a cook out discovered that the brats were not Johnsonville, and as expected, they were uber gross and tasted like roadkill. No amount of saurkraut could redeem them.

Then there are your cheddar brats. How did you know that my motto is "if it's got cheese on it, it's the best food ever!" Meat, cheese, classic combination. Ever since I was introduced to cheddar brats in my youth, I have vowed to make them a staple in my diet as an adult. Grilled to perfection, the juicy cheese flavor explodes in my mouth and causes a slight dairy high in my senses.

This is where the unsettling part comes in. A week ago, someone near and dear to me was accosted and injured by said cheddar brats. One of my favorite relations (whose anonymity I must protect) was egregiously injured while eating a cheddar brat. This man, who has been a master of the grill for decades had chosen to prepare your scrumptious chedbrats on his grill. He allowed them to cool and sit on the table before taking a bite. He was shocked when a slew of hot steamy cheese shot onto the side of his face. He recoiled in pain and wiped it off, commenting on how painful it was. Upon finishing his dinner, he looked in the mirror and realized he had a big chunk of skin missing from his face. A week later, he has a VERY visible wound and is a bit traumatized by what happened. Will he ever eat your cheddar brats again, I don't know. I will, but will be very careful when eating them as I do not want my face marred as well!

In closing, thank you again for your fine products and perhaps you should start a campaign to warn people of the ramifications of hot cheese.