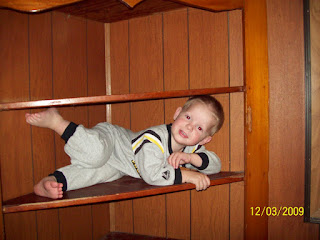 Today is my son's SECOND birthday! So, in honor of it, I decided to share the story about the day he was born:

Around 2am, I decided to go to bed (we were night owls back then, but now apparently I'm the only one who isn't.) My husband was going to stay up for a little bit longer, so I went to bed and A was already in bed sleeping long before then. I believe I was due Jan. 8, but I can't remember. I just know I didn't think it was accurate, but who am I to argue with doctors? So, I laid down in bed and dozed off... about 45 minutes later, I woke up, not sure why. I sat there for a bit and started to feel these funny little twitches in my stomach.

I went into the living room to tell Nick and they just kept happening. I told him I thought I was having contractions, so we felt my stomach and sure enough you could tell it was tightening. (Right now, you're probably thinking I should be in more pain, right? Apparently I was blessed with not being able to really feel contractions- until the end, cause boy do I feel those!) Anyway, so we realized they were pretty close together and called the hospital. They told me to come in. Unfortunately, my parents whom I wanted to babysit A were in Florida and I felt that our best option was to wake up Nick's brother and have him come stay with A at our house. We drove to the hospital in a town about 15 miles away and arrived around 4am. (Recall Nick had not gone to bed and I had about 45 minutes of sleep.)

We got checked in, the nurse called the on-call OB/GYN and they decided I could cook until regular hours when my doctor would be in. So I did.

As the day progressed, I was given pitocin and had my water broken to speed things up. (This happened with A as well, so apparently my child birthing is a slow process.) I was prepared for a long day of pain, sleepiness and frustration as I was in labor with A for 33 hours and it took me 3 hours to push her out.

Around 4pm, my doctor said I was ready to push. Nick and I looked at each other and then looked at the nurse because none of us knew if he was being serious. He was kind of known for being a big kidder. The nurse asked him if he was serious and he said yes. So, they got things ready and I started to push. I was braced for a 3 hour ordeal like the last one- thankfully it didn't happen! It only took me 6 minutes to pop that sucker out and it was quite nice compared to three hours! In fact, they tell you to push three times on each contraction and I remember pushing twice on the last one and he came out and I felt weird that I didn't get to the third one.

Anyway, L came out weighing TEN POUNDS! (Proof that I was right on Jan. 8 being an unrealistic due date cause I'm pretty sure he was overdue.) And now I have a little monkey.