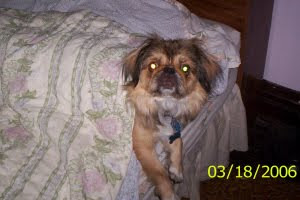 I love when I'm able to report happy news! And of course it's only happy for me and the dog involved, but...

If you read my post a couple weeks ago entitled "The Legend of Ozzy" you'll know about a dog that I'd had since he was born that was very near and dear to me, and I had the opportunity to get him back from a rescue group. (Read the story, I don't have time to sum it up again, lol.)

So, yesterday I planned on getting up at 5:30 am to drive the supposed 3 hours 40 minutes to where I was supposed to meet Heidi, one of the rescue people from Peke N Chin Midwest. Well, I was rudely awakened by my son at 3:30am and was unable to go back to sleep due to excitement. (Nick says there's something wrong with me that I keep waking up all night, but he's so wrong and that's a whole nother rant for another time.) I picked my friend Susan up around 7, we went to Casey's to pick up breakfast and coffee (I bought some No Doz, which was absolutely useless) and were on the road at 7:30am. Oh, and we had to listen to her boyfriend rant for about 10 minutes about how bad of an idea it was for us to be driving.

So, the trip was supposed to take 3 hours and 40 minutes according to Mapquest. Unfortunately, no one has explained to people that when the weather is bad and there's snow all over the roads, you should DRIVE SLOWLY. It's like a huge secret or something because we counted almost 40 cars in the ditches and this main interstate I needed to get on was closed for a couple hours due to a semi accident. Well, I got COMPLETELY lost. I even asked for directions from several gas station workers, who all kept telling me how to get to the interstate that was closed. Finally, the vet where I was meeting Heidi explained to me how to get to the highway that would be a back way in. I found it and swore not to deviate from this highway. Unfortunately, the blowing snow made visibility near zero most of the way and I had to avoid running into snow drifts. It took me about 2 hours to go 40 miles. In the meantime, I had to be lectured by a couple people over the phone about how stupid I was for driving there. No one understands my passion for animals and I HAD TO get Ozzy. I mean, how many times have animals made you cry? How many times have they yelled at you or put you down? Seriously, animals are like so much better than most humans I know.

Okay, so I get to the meeting point and there he was! He was exactly like I remembered and I was thrilled. I was exhausted, traumatized and on the verge of tears, but seeing Ozzy perked me up and made me feel like I could go on. (If Susan hadn't been with me, I probably would have been in a ditch curled in the fetal position crying to this moment.) So we snagged him up, chatted with Heidi and hit the road... more precisely the interstate. I was NOT going back on that highway we took to get in.

Visibility started getting bad around dark and sometimes I had to putter at about 10 mph, but we managed to get home in about 4.5 hours. I had never been so happy to see my house (cause you know I hate it.) Ozzy slept in the bed with me and it felt like he had never left. I think a part of my soul has been restored (which is good since WIU is sucking most of it away) and despite the verbal tongue lashings I got from so many people, I think it was worth it. I know he will have a good life here and I know that I need positive things and he makes me smile. It makes the world a little more okay.

Now, waking up to a cranky family this morning almost made me want to take another 12 hour road trip,.... but that's another story, too. I'm just so thankful to have him back! (The picture is one I took of him awhile before he got shipped off.)
at 6:53 PM