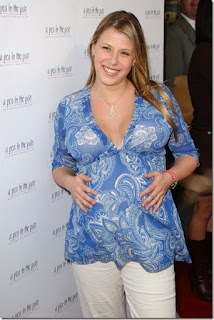 From time to time I will give my thoughts on some celebrity gossip involving mommies.

Today I wanted to talk about Jodi Sweetin. You know, the chick from Full House and more recently she hosted Fuse's Pants Off/Dance Off.

She's in the gossip news because apparently her husband is saying she is a drunk and unfit mother. You may or may not know that she had previously had problems with alcoholism and some heavy drugs- I wanna say cocaine. I swear she wrote a book about it, but I don't know for sure. But, she got clean, married, and has an 8 month old baby. Well, she left her husband in November and they are now trying to fight for custody and of course the claws have come out. She is living with her parents and due to the accusations from her ex, the court is currently saying that she can only see her child with her parents there. Tragic!

My thoughts on this are that it reminds me of the Britney/K-Fed debacle. Why is it that no one is concerned about the child's welfare until there's a divorce? So up until the court appearance, the husband didn't intervene on his child's behalf? And I don't know for sure whether it is true or not, but unfortunate none-the-less. And the even sadder part is that were they not celebrities, this wouldn't make headlines. Kids are raised in this environment all over the country and no one steps in.

I will be interested to see what happens at the next hearing. Both parents were ordered to take drug tests. I would like to think that Jodi was able to stay clean for her child.
at 8:22 AM