My Thoughts On: Monogamy 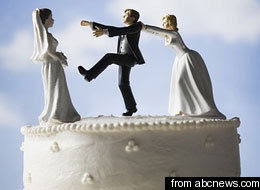 As you know, I'm a free thinker. I don't expect to have hoards of people who agree with me, and I definitely don't think I'll find too many with this one, but it would be great to be pleasantly surprised!

People always talk about how penguins and humans are notoriously known for being monogamous. I DO NOT think that humans are meant to be monogamous, I just think that because we have high levels of thought function, we have convinced ourselves as a society that we are supposed to be monogamous. People use the words "soulmate" and "love of my life" to describe "the one." I think this is bunk!

I believe in compatibility. You could "fall in love" with a lot of people, if you find people that are compatible with you and you are in the mindset that you're available.

But, there's a huge flaw in the monogamy theory. Two words: adultery & divorce. That gives me an inkling that human beings are not meant to be monogamous. How many people stay in a miserable marriage for years (or life) just because they think that they are "in love" with the person they are with or that the Bible doesn't go for divorce. I'm pretty sure that Jesus didn't die for our sins so that people could blame him for the reason they are staying in a miserable marriage.

Okay, so just because I don't believe that monogamy is really meant to be part of the human condition, that does not mean that there should be promiscuity running rampant in society. That would be what separates us from the monkeys. We should have the intelligence not to put disease and ickiness out there.

So, if you're in a beautifully, wonderful, fun filled, happy, monogamous relationship, more power to you! It's a rarity! But, if you think like me and realize that life's about compatibility and that some people change and are not compatible for ever, then kudos to your free thinking attitude!

What do you guys think about this? Anyone think I'm stupid and want to yell at me? Anyone want to marry me cause they love my attitude (sorry, I'm not biting!) Tell me what you think!

I wanted to point out because I realized it might sound like I condone cheating. I totally don't! Cheating on someone is the ultimate form of disrespect. That's why if you realize that monogamy is unrealistic, you don't tell someone you're committed to them if you're not.
at 1:09 PM

Email ThisBlogThis!Share to TwitterShare to FacebookShare to Pinterest
Labels: marriage, monogamy, my thoughts on