My Daughter Drives Me Crazy!!!

If you recall, 8 months ago I similarly posted that my son drives me crazy.  Oh, how the tables have turned.  My son will be 5 in January and he is a sweet and easy-going little boy.  He loves preschool, he stays in bed all night and he pretty much agrees to anything you ask him to do.  I like to think of him as an angel now, lol.

My daughter, however, is another story...

Once again, children are a gift from God, blah blah blah.  Now that I got that formality out of the way, let me tell you about my mini-me.  She will be 7 in December, but I'm pretty sure she has aged a decade in the past year.  The attitude!!!  Here's my biggest beefs with this child: 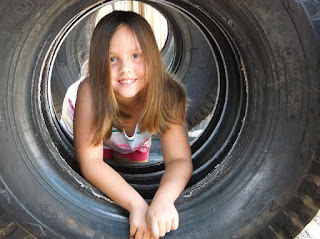 These are just the highlights.  I know that she has A LOT of similar characteristics to myself.  David even says she makes the same faces as I do.  Her attitude doesn't phase me, because I know she's trying to get a rise.  But some people can't let it go and have to react about everything.  And it's not about discipline, because I think I do a very good job disciplining my kids.  I don't know why she is such a grumpy gus.  I thought this attitude was reserved for teenagers.  It bums me out because she is so smart and funny and it's great when she shows her good side.  Sometimes she says things that are very profound and she is very wise for her age.

I'm wondering if this post will get the same kind of reaction as when I wrote about my son.  Are girls actually harder to raise than boys?  I've always thought it was the opposite.  I know as teenagers girls can be absolute witches, but I've met some boys that aren't very nice to their parents as teenagers either.