The Outsider is now available on DVD and Blu-ray!

I've been a fan of Stephen King since I first discovered his books in middle school.  My parents wouldn't let me watch his movies, but they didn't stop me from having them play out in my mind as I read the fascinating, enrapturing words on the pages.  Over the years, I've had less and less time to read, but still enjoy keeping up with any of the Horror/Suspense Master's work. 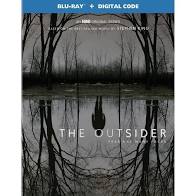 I have been fortunate enough to be able to review The Outsider (first season- not sure if there will be more), but I had already watched it all on my own as it aired.  Each Sunday I was anxious to find out what happened next.  Okay, I'll be honest, I looked up the book before the series was over to try and get some spoilers.  By the time the series ended, I was disappointed it was over, but definitely not disappointed in the time that I had invested watching it.

From the first episode, I was hooked.  Terry Maitland, a loving husband and father, little league coach, well-liked in the town, is arrested publicly in the middle of one of the games.  He is being charged with murdering a local child in an extremely gruesome and sadistic way.  No one is more shocked about the accusations than Terry himself.  He insists he has nothing to do with it and wasn't there.  He provides an alibi, but the police believe they have undeniable proof... and they do... but Terry has undeniable proof he DIDN'T do it.  Make sense?  How can one man be in two places at once?  The series continues with one tragedy after the next, one mystery after the next.  Just when you think you understand, you're given new information that throws all the previous theories out the window.

Not only is the story great, but so is the acting.  Justin Bateman plays Maitland, but my favorite by far was Cynthia Erivo playing Holly Gibney.  Her scenes were intense and fascinating.  The plot itself gave me a slight "It" feeling, but without the clown.  A town trying to solve impossible events and experiencing random deaths.

Don't just take my word for how good it is, buy it for yourself!  It originally aired on HBO.
at 3:06 PM