I lost my how-to book on parenting kids who are bullied. 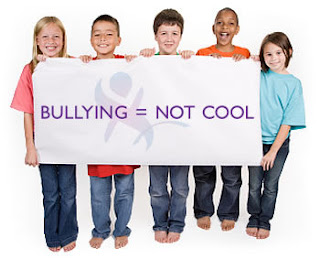 I don't read books on how to parent.  I parent.  I parent based on what feels natural, and also from experiences that seemed to work or sounded like good ideas.  But right now I feel a bit lost.  Bullies will exist until the end of time because there is no perfect solution and schools can't fix everything.  I think kids being bullies is something they learn at home.  They witness how their parents treat people and also can turn to bullying based on how their parents treat them.  Schools don't know what to do and even schools with strict "zero bullying tolerance" don't follow through.  It's hard for teachers to know where to distinguish between tattling and bullying.  Some teachers honestly don't care, cause some teachers are actually assholes themselves.  I'm allowed to say this because I am a teacher and I've witnessed this lack of empathy before.

My experiences being bullied are actually very small, which is surprising if you look back at my school pictures before high school.  I dressed like a cat lady, hated jeans and my mom chose my hair style until I was in 6th grade.  That's when a well-known girl bully stated in front of the entire classroom that my hair looked like a wig.  She was right, but that was not nice.  Wanna know what the teacher did?  Nothing.

Other than that, the only bullying done to me was fat shaming.  I had never thought I was overweight until I was like 19 or 20.  But in 8th grade, two friends and I were walking down the hall and we had our cheerleading uniforms on.  He called us Thunder Thighs.  I didn't even know what that meant until years later.  Another fat shaming incident happened in 8th grade.  We had a student-teacher in science.  She was not one of those people who just let the popular kids get away with being a-holes, and that day one of the popular boys was being annoying (as usual) and she made him sit at the empty spot next to me.  He was mad, so he walked behind me and said, "scoot your fat ass up."  VER BATIM.  I was pretty embarrassed because 1) I didn't know I was fat 2) the whole class heard him and 3) we'd been "friends" since kindergarten!  Well the teacher (kudos to her) didn't let it fly and sent him to the office.  He had to apologize to me at school and as if that wasn't mortifying enough, his dad BROUGHT HIM TO MY HOUSE to apologize- thank God I was at a sporting event and didn't have to suffer through it.  Aside from that, my dad would tell me I shouldn't eat so much, then when I lost weight accuse me of having an eating disorder, then when I gained tons of weight, he said people would respect me more if I lost weight.

So, fat shaming is the only form of bullying I really have any experience with that I can try to give advice about.  I've had to do that a couple times with my daughter.  A lot of times the bullying talk prefaces with why kids feel the need to bully and how sometimes they say things that aren't even true, but they just want to hurt someone's feelings.

Both my children have encountered some bullying this year that kind of leaves me in a quandary about what to say or do.  Of course, depending on what it is, my first advice is for them to tell their teachers.  That's easier said than done, because kids don't like to narc and oftentimes the teachers don't do anything about it.  I think that although bullying is not a new concept in any way, I think as times change, it gets harder for kids to just be kids.  They are learning about adult concepts earlier and earlier and are wanting to be older at younger ages.  It's a sad state of the world that kids can't be as carefree as they should be able to be and that all this peer pressure is pushing them into caring about things that no child their age should have to.

My son is in second grade and is very sensitive to being made fun of.  One day he wanted to go to school with spiked hair, so he did, got made fun of, and didn't want to do it again.  Then, despite cleaning his ears all the time, a girl made fun of him for having earwax.  He was mortified.

My daughter (fourth grade) just came to me in tears two days ago because of something that happened.  She was ambushed by two girls that she had never had an issue with.  They told her that they were tired of her "hogging their friend" J, who is one of A's best friends.  They said that they had been her friend since before A had moved to Cedar Rapids and she needed to stop monopolizing all of J's time and being her partner in math, etc.  A explained to me that generally these girls don't even play with J at recess and that J is the one who always asks her to be her partner.

What do I say to my kids about these things?  My son's issues were easier, but with my daughter, I really didn't know what to say.  I suggested that she just continue to do what she was doing and that those girls were probably having an issue that one day for some bizarre reason.  What did she do instead?  She wrote them apology notes.  WHAT?!?!  I told her that they did not deserve apology notes from her as she had nothing to apologize for, but at least she handled it in a nice way.  Some parents suggest standing up to bullies with fists... and that is just Grade A Stupid.  Some parents want to go talk to the kids themselves- I don't think that works either.  So here I am, at a loss.  What should I tell my kids to do about bullying that is usually a one-time thing and not a recurring offense?

PS I do have this story of when I was in 7th grade and waiting for my ride to pick me up after a track meet.  These two girls thought it would be funny to chase me around the school and try to spit on me.  They thought it was funny and we were actually kind of friends, but they were a year older and obviously born in barns.  One has since become super Christian and has been denying that it happened since I brought it up in 11th grade creative writing.  But she's in denial.  It happened.
at 4:35 PM

Email ThisBlogThis!Share to TwitterShare to FacebookShare to Pinterest
Labels: fat shaming, fourth grade bully, how to deal with bullies, my child is being bullied, second grade bully, what to tell your kids about bullies