I'm a big advocate for animal adoption.  There are so many shelters and rescues out there with animals that need good homes, so I urge anyone considering getting a new pet to check one of these out first.  Even if the shelter is no-kill or the animal is living with a foster, that doesn't mean that they have a good life ahead of them.  Despite all that shelters do to try and keep the animals safe and happy, their space is VERY limited and no animal gets the amenities that they would have in a good home.  And even though a foster home provides a good environment, an animal waiting to be adopted is keeping that foster from taking in another rescue that could be on death row at a kill-shelter.

There is my appeal to everyone who has room in their heart for a new pet.  Now here is my example: 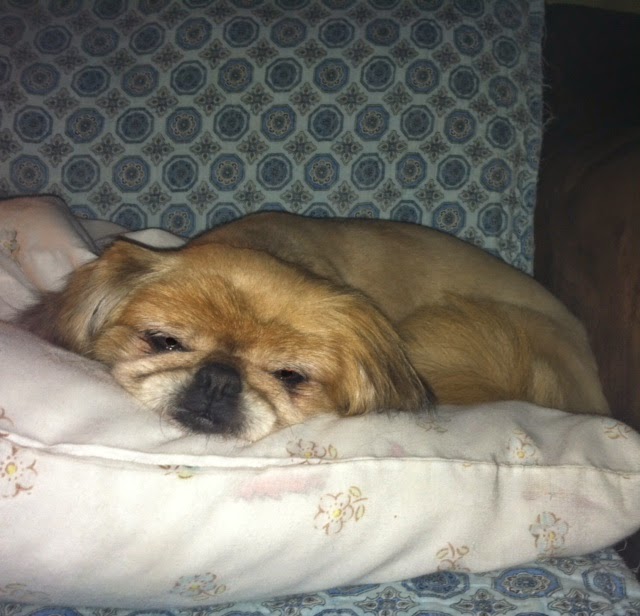 I currently have four dogs, three of which came from my favorite rescue group.  One is a puppy mill survivor, one was found as a stray and placed in a (kill, I believe) shelter and the other is Angel.  The reason I am choosing to write about her over the other two is because of how drastically she has changed from the day I picked her up to now and it has only been a few months!  Although back stories with dogs can be akin to playing telephone, where the truth becomes warped into "based on a true story," I do think that the basic story can be somewhat the same.  Angel was at a no-kill facility that was getting ready to be closed down and PNC Midwest stepped in to find her a foster and put her up for adoption.  I agreed to foster her.  She was taken directly from the shelter by another volunteer to meet me and I took her home the same day.  According to the shelter, she came from a breeder that would leave his dogs in the house for days at a time while he would drive his truck driving routes.  The story was that he died on one of his routes and the dogs were left in the house for awhile and when they were "found," they were sent to various shelters that were willing to take them in.

When I received Angel, I was informed that she could not go outside as she would foam at the mouth and that she was paper trained to go inside.  She had a "hot spot" near her tail that bothered her and she had to be picked up a certain way.  That was about all I knew.  I had never heard of a dog that could not go outside, so I quickly filed this in the nonsense category.  She seemed to have a hard time walking as if she had some serious hip problems going on and she was very sensitive to being touched.

Upon taking her to the vet, it was discovered that the hip problems were due to extreme flea infestation that caused an allergic reaction in two spots on either side of her tail and it was causing her lots of discomfort.  She was spayed, had to have a couple teeth extracted and sent on her way.  Her age was estimated at 8 years. When I got her home, I bathed her, trimmed her up a bit and began my foster mommy job.

Fast forward to now: I decided to adopt Angel because once she learned what TLC was and that not all people are scary, she showed that she is an incredibly sweet and mild mannered pekingese!  The foaming at the mouth was a nervous thing that went away completely after a week.  She loves taking walks outside, but also has no problem being let out in the yard.  She is housebroken now although we do leave a puppy pad down for when some of the dogs just can't hold it in apparently.

Angel is a snuggler, loves lying on the couch and will put her paws on your legs and go to sleep.  She has no issues with being bathed or shaved/clipped and enjoys napping with me on the bed.  She is a little timid with the kids, but who wouldn't be?  They scare me sometimes.  She is an absolutely fantastic addition to our family!  And the best part is knowing that I am able to give her the life she deserves.  She no longer has to be afraid of her surroundings, in pain due to lack of care or overweight from lack of exercise.  It is a good feeling knowing that I could do that for her.

And it is for reasons like this that I urge people to adopt animals, not shop for them.  And if this story inspired you enough to find a rescue group that needs fosters, don't hesitate to do so!  There are rescues all over the country for all different breeds and there is never an end to the animals that need to be saved and given good lives.  Just thinking about how you have the power to change a life for the better, that is one of the greatest feelings in the world.  That's how you can find YOUR "Angel."
at 11:25 AM