City of Procrastination: Population Me 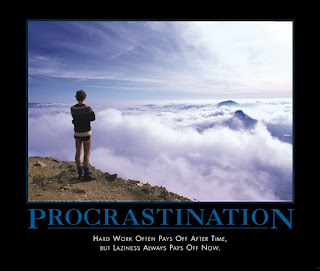 Webster's describes procrastination as "to put off intentionally the doing of something that should be done." This is me... and I hate it! Everyday I wake up thinking of all the things I need to do, but I'm lucky if I actually get one of those things done. My biggest procrastination right now is school work. Out of my five classes, only one has "difficult" assignments. The rest are just tedious. And so I put them off... and put them off... and then I will get stressed out that I'm running out of time.

Rarely will I get this kick that makes me get things done and it will last about a week. I'll be like a machine, cleaning, doing school work, blogging, keeping in touch with friends, you name it, it gets done! (okay, maybe not dusting, but who really does THAT?)

Funny enough, the one thing that gets done on a regular basis is laundry. I do loads of laundry all the time. Then I fold it... and it sits in the basket... because putting laundry away is tedious, lol.

So, does anyone have any suggestions on how to break the procrastination habit? I'd like to do some research on why people procrastinate. I'm gonna google it now and let you know what I found... *jeopardy theme*

(From the University of Cambridge Counselling Service)

Why do people procrastinate?

* poor time management, often associated with a distorted sense of the time available
* an inability to prioritize
* overload of tasks at a specific time
* anxiety about the task, so time is spent worrying rather than doing
* difficulty concentrating
* not knowing what is required
* feeling overwhelmed by the task(s)
* concern about failing or not meeting your own standards
* fear of success and its possible consequences
* perfectionism, often associated with unrealistic standards
* negative feelings - e.g. "I'm stupid", "nothing ever goes right for me"
* all-or-nothing thinking, where one setback is seen as a total catastrophe
* being bored by the task
* never having learned how to work or sort out problems while at school or living at home
* avoidance of things which are disliked or difficult.

Okay, well there we have it... that's why, now I just need to figure out how to change my procrastinating ways! Out of that list, it seems my problem is the "being bored by the task." Although, I'll also say to be funny that I'm afraid of success. Their website did have tips on how to overcome it, so maybe I'll try some of those.

What do you procrastinate about?
at 12:05 PM

Email ThisBlogThis!Share to TwitterShare to FacebookShare to Pinterest
Labels: procrastination