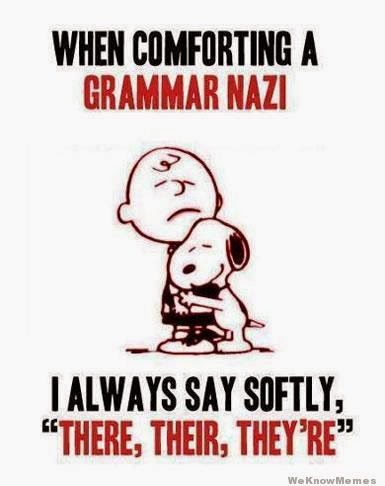 Now, I'm not Dr. Spock, but really, what makes him an expert- just because you take a bunch of college classes, doesn't mean that you are the be all, end all gospel on a subject.

Anyway, I think I'm a pretty good parent- of course, time will tell how my kids turn out, but for now, based on observations of those around me and my hopes to make better kids for the world and society, here are some pet peeves of mine that I have seen other parents do that are big no-no's in my book.  Also, I've thrown a couple links to articles that I've read in the past that I have found to be a worthwhile read.

1) Spanking.  I started with this because it's the most cliche parenting debate that people seem to talk about.  I'm against spanking for many, many reasons.  I won't get into all of them, because they are all reasons that are out there, so why go into it?  This also includes variations of physical ABUSE, such as mouth popping, arm wrenching/dragging, swatting, etc.  I prefer the timeout method or grounding.  For younger kids, I ground for an hour at a time, based on the severity and usually the hour is lying in their bed, no TV or games.  That usually only gives them the opportunity to color or read books.  Timeouts are usually for small things that they have already been told not to do.

2) Picky eaters.  I know that not every kid will eat every food you offer them- do you?  I know that there are some things I refuse to try and a few things I just don't like.  But how will your child every grow to be a foodie as an adult if they were never "forced" to try anything?  I've seen too many people who fix their kids chicken nuggets or hot dogs every single meal because "that's all they will eat."  I call BS on that.  I've come to realize the things my kids will and won't eat and if I think it is in the realm of possibilities that based on their other likes that they might just like the new food... I make them take one bite.  A lot of times, since the older two don't want to be wrong, they will say they don't like it, but don't complain about finishing it.

Then, there are things that we KNOW they don't like, so if David and I want to eat them, we will make an alternative for the kids.  For instance, neither of my kids like actual hamburgers.  My daughter doesn't like them from anywhere, but my son will eat the whatever kind of meat they are hamburgers from school or fast food.  So, if David and I want a burger, I will make the kids both something different.  Likewise, I know L doesn't like potatoes of any kind really.  So, I try to substitute some kind of carb as a replacement.  A doesn't like ground beef, so if I make something with ground beef, I find her a main dish replacement.  I know this isn't up to par with, "you eat what I make or you don't eat," but I think there's a happy medium between that and being a short order cook who makes a different meal for each kid every night.

3) Video games.  Back when I was knee high to a grasshopper and walked in 6 feet of snow uphill both ways to school, we played outdoors.  Hot, cold, raining, snowing, whatever, we played outdoors.  We liked it.  We played ball or make-believe or rode bikes, etc.  And then my brother Greg and I would play with action figures (or I'd bribe him to play Barbies) or Monopoly or Risk (somehow I never won.)  And I LOOOOOVED to read!  I'm pretty sure you could say my brothers and I were nerds as adolescents.

So, when people let their kids play video games the majority of the time they are home, I feel sad for our future society.  What are kids learning by playing video games all the time, other than to be lazy and crush their creativity?  I've had kids come over for play dates that get bored after half an hour because we won't let them play our Wii.  Generally my kids play the Wii once a week and in order to play it they have to have gone outside that day.  And my daughter likes to play on the computer occasionally on Nickelodeon's website.  Lately, though, she has been having fun typing stories.  And in order to play the computer, she has to have helped do something.  Video games in our house are privileges, not babysitters.

4) Public diversions.  You take your kids out to eat and they say they are bored... they start to have a hissy fit because they want to leave, what do you do?  Give them your phone and let them play games?  I disagree.  How is that any different than you being on  your phone at dinner?  It's rude.  Plus, why can't you teach your kids that if they are going out in public with you and you are buying them dinner, they should be grateful and not embarrass you.  I don't recall being a problem like that for my parents, and I've never had this problem with my kids.  Granted, sometimes they make pyramids out of the creamer cups, but that's not really hurting anyone.

5) Spoiling.  It's okay to "spoil" in some instances.  But, if your kid is a demon spawn from hell who calls you names, yells at you, refuses to help, or never listens, why on earth would you reward them for that behavior?  If you kid is constantly doing these things and you continue to buy them everything they want or expensive clothes or games, etc., what are they learning from this?  They are learning that they never have to respect you because they get what they want anyway.

6) Blink once for yes.  One thing I hate hate HATE to hear from a parent is, "do you understand me?"  Like, when they are lecturing.  I want to shriek, "yes, they understand you, they aren't deaf or dumb!" Or then there's the act of punishing a kid for crying, or threatening to.  Seriously?  Maybe their reason for crying is lame, but punishing someone for crying?  That's just mean.

Childhood is a pivotal time when kids are forming their future identities.  Yes, peers will come along to disrupt that identity, but the roots are there from when they were young.  You can't expect your kid to grow up and just snap out of all these negative things.  Now, feel free to hold all these opinions against me when one of my kids become a serial killer, but for now, I think I'm onto something.  The world is full of douchebags, so why not try to add some adults that are not.
at 11:13 PM 2 comments: