I'm attempting to watch all the movies that were nominated for an Oscar this year.  I am going to post my review of each one with how I actually felt about the movie.  I'm not going to give a detailed plot because I'm not amazon and you can easily look there... or imdb... or wikipedia...

I didn't mind watching Gravity because I like Sandra Bullock and George Clooney and there were frequent references to it in pop culture, on the radio, in jokes and I needed to be in the loop.

I normally only rent movies when they come out on Redbox and even then only with free codes- cause I'm cheap so that's how I roll.  I did however, let my husband convince me to pay to rent it at Family Video the weekend it came out.

It was good.  Was it exceptional?  No.  The plot kept my interest, but the ending seems pretty predictable.  I think the wow factor of the movie that got it the Oscar buzz is that you had the Cast Away theme going on where one person gets stranded after an accident and the entire movie is pretty much a one-man show.  That takes talent to pull off and I thought Sandra Bullock did a convincing job, so kudos to her.

Do I think it's worth the rent?... .... ... ummm... yes?  I mean, it's an easy watch from start to finish, but being trapped in space doesn't bring quite as many entertaining opportunities as being trapped on an island for years like in Cast Away.  If you're looking for something to rent on a slow weekend or rainy day, I doubt you'd be disappointed if you spent the $3.

Email ThisBlogThis!Share to TwitterShare to FacebookShare to Pinterest
Labels: cast away versus gravity, gravity review, gravity worth the 3 dollars, my 2014 oscar reviews, sandra bullock

Recipe is from KRAFT, list of tweaks at are all mine.  (Brand names have been removed.) 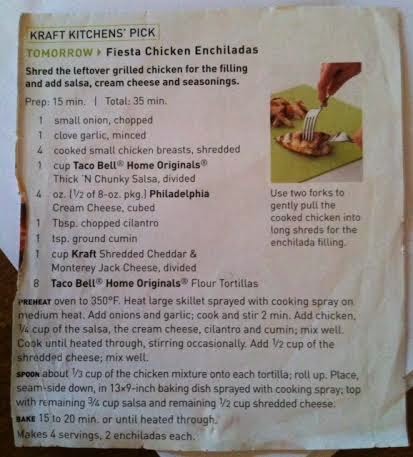 SPOON about 1/3 cup of the chicken mixture onto each tortilla; roll up.  Place, seam-side down, in 13x9-inch baking dish sprayed with cooking spray; top with remaining 3/4 cup salsa and remaining 1/2 cup shredded cheese.

MY TWEAKS:  If you're a daring cook or don't care about following recipes to a T, here's some tweaks you can try.  First off, the main components are chicken, cumin, cheese, salsa, cream cheese and tortillas.  The rest is added flavor, so if you don't have everything, don't panic.

*add-ins: peas and hashbrowns.  I'd say frozen of each (plain hashbrowns), but make sure they are mostly thawed when making the enchiladas.  Add them at the point you add the chicken, cheese, etc.

*meat options: you can use canned, grilled, baked or fried, it all depends on the taste you like.  I baked mine tonight using canned chicken (lazy) and my husband picked buffalo flavored chicken and I picked grilled, so I had to make 2 separate batches.

*cheese options: the original recipe calls for cheddar & monterey jack, but it really doesn't matter much.  I usually use taco or Mexican cheese.
at 6:56 PM No comments:

Yes, it's true.  Baking soda puts out small fires and Technology puts out small friendships.  They've been talking for years now about the percentage of marriages that end due to Facebook.  Well, what is on my mind today and of late is that I wonder how many friendships have ended due to technology in general.  Here's my theories on the what and why:

Facebook:  Let's go ahead and start with the big one first.  Ah, yes... Facebook has caused people to murder each other (for reals, look it up!), couples to divorce, affairs to be had, houses to be burglarized-- all stemming from a website that is meant to reunite friends and make new ones.  But it can also lead to non-psychotic splits of friends and "friends."  For instance, there's the check-in.  Here are random thoughts than can be had from a dissed friend due to check-ins.

"She's at dinner with Laquesha when she told me she was too sick to hang out with me??? That $#!%@!!" or "Oh, so Rodunda, Laquesha, Badoo and Svetlana decided to do dinner and karaoke and none of them invited me?  Is my phone off- NOPE.  Those $#!%@es!!"

Then there's the Ooooh, so you ARE alive moment.  You have not received a text back for days, which has left you a sobbing mess, lying in a corner in the fetal position because you are so worried that your friend has died.  But there is no rejoicing to find they are well... because they are happy and well... and don't want to let you know.

Then there's the dreaded Status Update.  Whoa, $#!%@, whoa!!!  Was that post about me??  Did she really just put that out there and think I wouldn't know it was about me??  Imma bout to go all passive aggressive on her a$$ too!

Cell Phones:  There are three friendship killers that can be caused by cell phones.  They are:

1)  Crickets Chirping... remember that time I texted you and you never responded?  Oh, you didn't get that text?  Did I mention I mailed you a check for $1000?  What, you didn't get it?  Hmm, the post office must have lost it.  Does this sound like Grade A Horse Hockey?  Good, cause it is.  I'm not buying into your lack of response.  At least text me with some lie about why you can't text and then just inconveniently forget to text me back.  That's also lame, but a little more acceptable.

2)  Dangling Chads...  Hey, Boo, remember when I was lonely and/or upset and I texted you and you responded like twice and then the crickets started chirping?  I remember cause it happens like everytime I text you!!  At least have the courtesy to LOL kill the conversation so that I know I'm getting blown off, but not snubby like.

So what does this all mean?  I'll tell you what it means... if you have any friends that fall into these categories more often than not, they are small friends.  That means, you probably think more of them than they think of you.  Wait, Hammy, what if they are just busy...  ooooooh, my poor, poor, deluded reader... if they have time to go potty, they have time to text a hi once in awhile.  If they have time to eat, drink or breathe, they have time to respond to your text with an LOL or a Hey, I'm ALIVE!

But if you have friends that don't commit these egregious acts on a regular basis, consider yourself lucky to have them!  Good friends are hard to come by these days!  And what do you do if you have a friend that falls into the small and questionable category??  NOTHING!!!  ABSOLUTELY NOTHING!!  If you unfriend them on Facebook, you could get murdered!  They might spread malicious rumors about you or... *gulp*... avert their eyes when they pass you in Walmart!!

Just look in the mirror and tell yourself, "Hey, I have a mirror."

The Mini Pill: You've Been Warned!

Previously, I blogged about the horror that is Mirena.  My ob/gyn seemed completely flabbergasted and in denial when I told him about the adverse and completely unwanted side effects that came with it.  It became clear that he:
1) Doesn't do enough research.
2) Has been sold a crock of bologna by the sales reps.
3) Has some kind of investment with the company that creates it.

So now I'm thinking that the same thing has happened to him with the Mini Pill.  Also called Nora-Be, norethindrone, Micronor, Nor-Q-D, the mini pill is unique because it does not contain estrogen, only progestin.

I have never had luck with oral contraceptives- oh, sure, they work just fine in that you don't get pregnant while on them (at least I never did), but sometimes the side effects make it impossible to continue taking them.  Ortho tri-cyclen was not terrible.  The only real side effects for me were hormonal imbalance and inability to lose weight.  The problem with taking additional hormones is that I also take medication for Bipolar Disorder and have Borderline Personality Disorder as well.  So these additional hormones tend to counteract with the good my psychotropic meds are doing me.

At my 6 week post partum check-up in January, my doctor suggested the Mini Pill because I was breastfeeding.  We also discussed the benefits of it not containing estrogen.  He said the only downfall was that you had to take it at the exact same time every day, because anything more than 25 hours later can make it ineffective.  Remembering to take medication is hard enough for me, but at a certain time?  I decided to set an alarm for it, so that made it easier.  About 2 weeks prior to this I had my Prozac dosage increased.  I was feeling GREAT.  I had started losing weight too.  I felt more energetic and just overall wellness.

Two weeks after starting the mini pill this all changed.  I was crying almost every day, I felt extremely bloated all the time, I was moody and I put on 8 lbs!  As I always do when feeling different, I googled information about any new medications.  Lo and behold, there were many negative reviews out there of the mini pill.  The first sentence in the WebMd listing of side effects was, "Nausea, vomiting, headache, bloating, breast tenderness, or weight gain may occur."  Check on the headache, bloating and weight gain.  Great, two weeks in and I was experiencing 3 of the 6 common side effects.  Not only that, but I found an interesting study on the mini pill and people with bipolar disorder and/or depression.  Another reason I wasn't thrilled about the mini pill is that you don't take a week off for a period, you just continually take them, which can cause occasional, random spotting.  I am a big proponent of the idea that prior to menopause, not having a period is unnatural.  I think that was one of my biggest problems on the Mirena- it felt like my uterine lining was thicker than a brick wall and needed to be shed.

Upon this research, I quickly decided to stop taking the mini pill.  Within a week, I was feeling good again, no bloat and I lost 5 of the 8 pounds I had gained.

Again, as women, it is important for us to be in control of our bodies and so many people believe that doctors know everything about the drugs they prescribe and we believe them when they promote certain drugs over others.  Not I, as an adult I've never hesitated to question a doctor if I think they are wrong (of course I don't usually question them to their faces.)

You've read my warning, but try for yourself.  Of course not all medications affect all people the same way, but if you have noticed these symptoms and are on the mini pill, you may want to look into alternate options.
at 11:14 PM 2 comments: