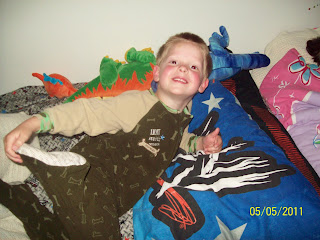 My 3 year old son cries over everything... no, really, EVERYTHING!  It is starting to make me a little crazy, and I've tried so many things to get him to not do this.  He will cry because you tell him no, he will cry because someone turns the channel on the tv, he will cry because he ran out of toilet paper.  He cries over everything.  Now, I believe it's okay to cry for certain reasons and I understand that he is a child, so I cut him a little slack.  If he gets hurt, if his favorite toy breaks, I get it, go ahead and cry, Son.  But no exaggeration, I would say he cries at least twenty times a day!

And this is a mixture of just throwing his head back and wailing and the occasional real tears.  But if you distract him, two seconds later he will be laughing and smiling.

So what's a mom to do?  (Other than get a Xanax prescription.)  I've scoured the interweb for ideas and solutions with no success.  I've tried ignoring it and going on with life as usual.  I've tried sending him to his room every time and telling him he can't come out until he's done crying.  I've tried timeout.  The one thing I haven't done is give in and give him what he's crying about.

An example:  I am cleaning the living room and he comes up and tells me he wants candy.  Now, my kids get candy maybe once a week, so the likelihood I'm just going to give him random candy is as rare as seeing an albino rhinoceros in Central Park.  So I will simply say, "no, you're not getting candy" and bam!- the crying starts.  There's occasionally throwing himself on the floor crying, hitting things, throwing things, full blown tantrums.

When will it end?  What can I do?  It's been going on for at least three months and since I am the one around him 98% of the time, I know it's not because someone else in his life is giving into him.  It embarrasses me when people come over and see him do this or when I am babysitting kids younger than him and they ask why L is crying.

Someone attempted to tell me that it's because I didn't let him cry it out as a baby.  I really don't think that's the case.  I didn't let my daughter cry it out and her only issue is a bad attitude.

I'm at a loss.  This is one conundrum that has me pulling my hair out and banging my head on the wall.  I am willing to try anything at this point short of shock therapy.  Help!
at 9:05 AM