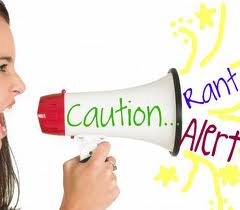 Okay, so since starting on my Lamictal (shout out to GlaxoSmithKline), my rant sessions have been few and far between.  In fact, despite my wanting to rant right now, I feel pretty calm... and pretty dang tired, but I blame that on my friend's cats that are temporarily bunking with me and my boyfriend's nephew waking up 30 times last night.  Anywho, onto my rant:

First, the heat.  What... in... the... freak?  I mean, 100 degrees and humid??  Are you kidding me???  I don't mind the warm weather, but the humidity makes me want to take a sledge hammer and pound some skulls.  I'd eventually like to move to Maine, I think, but I'm thinking it is humid there as well.  Although the Atlantic Ocean is quite chilly, sooooo... I have wanderlust, boo.

Second part of my rant will not involve names.  I just find it humorous that I received a voicemail the other day (ON MY PHONE) where I was told that said person was trying to get a hold of me all weekend, but since I had blocked them on Facebook, it was not possible.  Okay, let me get this right... you are able to call my phone, but you can't get a hold of me any other way than Facebook??  And I was informed that if I unblock them, they can get in touch with me... *smacking forehead* Oy vey!

Third rant:  why can't people just do what I want when I want and not be upset about it?

Well, that's my rant for today.  I'm always here to listen to your complaints... or pretend I did and nod in agreement.
at 12:47 PM