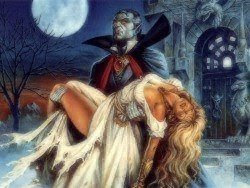 Neither do I! I recall elementary school when the library got in a crisp new copy of an abridged version of Bram Stoker's Dracula. I was hooked. I wanted to know more about these immortal bloodsuckers. As I got older, I continued to be fascinated. I wanted so badly to see Interview with a Vampire, but it was rated R and there was no way I was going to convince my parents to let me see that. So, I opted to read the book. I recall doing a book report on it in eight grade, in fact.

Well, years passed, my interests went elsewhere, and I slightly forgot about my love for all things vampire. Oh, there's been things here or there, like the revival of Dark Shadows on TV, that didn't live long, the excitement of the rumor they were going to make it into a movie and the bummed outness when it didn't happen.

And then of course came Twilight. I'll admit, I had vaguely remembered my sister in law telling me about it, but at the time, I was way too busy to read for fun. Then the movie came out and I really wanted to see it. I forgot how captivating the stories of immortality and undying love could be. I think we all fear death at some point and who doesn't love the idea of love and it being all consuming and all encompassing? I was smitten and had been bitten- by Twilight fever.

I ventured into reading all the books in the saga, but was incredibly disappointed at how not well written they were! The story was superb, but the writing was not. So, 600 pages into Breaking Dawn when I could not bear to read one more word, I googled the ending. I love happy endings!

Of course this is old news. But, I am so surprised by all of the websites, blogs, chats, twitter characters devoted to the romantic world of the vampire! Recently, I was dragged into a chat at Olympic Coven and was amazed at how detailed these people are! They have created a whole world of characters, inspired by Twilight. Each character is portrayed by a real person and they each have a twitter account for that character. The dedication these people put into these roles is mind blowing! But IRL, they are some of the nicest people you could meet!

As aforementioned, I know I am not first in line to talk about this newly surged love in all things vampire, but have only recently been reintroduced to an idea that is delicious in its theory and design.