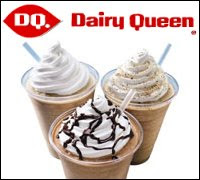 As an avid Arby's lover (connoisseur, if you will)I have long been loving their jamocha shakes. The first time my lips touched the straw to a moolatte, inhaled the coffee aroma and then tasted the delectable nectar of the Gods, I forgot what the jamocha even is! There is nothing on earth that compares to its creamy, coffee goodness...

Then there's the quesadilla. Despite the slogan, "hot eats, cool treats," I'd go as far as to assume that not many people consider Dairy Queen a place to go for anything other than ice cream. However, they owe it to their taste buds to do just that! The black olive is underrated. The mixture that you put into your quesadillas makes me want to die of bliss... it is THAT good... cheese... veggies... chicken.... olives... I see nothing worthy of complaints.

I would go as far as to wonder if on the seventh day when God supposedly rested if he was not perfecting the moolatte recipe, but it isn't in the Bible because he was worried someone would steal it... but you have... and I'm not sure stealing from God is a good thing, but in your case, I'll allow it (just don't tell God.)

In closing, despite the unhealthy amount of calories, and despite my fear of gluttonous retribution, I would go as far as to say that I could eat your quesadillas and drink your moolattes every day until I die.