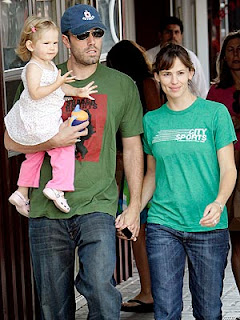 *Ben Affleck and Jennifer Garner welcomed a baby girl Tuesday! No name given yet, but the couple has a first child named Violet. Hopefully they will stick with normal names and not a bizarre name as seems to be the norm with celebrities lately. Ben + Jen have remained pretty low-key lately, which is great for them!

*Rebecca Romijn and Jerry O'Connell welcomed twin girls Dec. 28! This is the first children for the couple who go together after Romijn's split from actor John Stamos. The names are Dolly Rebecca Rose and Charlie Tamara Tulip. Somewhat normal, but also a little strange. I've never heard the name Tulip on a person before.

*And in celeb mommy gossip: Kelly Rutherford from Gossip Girl has reportedly split from her millionaire husband. Rutherford, who is 3 months pregnant, was said to have filed divorce papers on Dec. 30 citing "irreconcilable differences." The couple also has a two year old son. It's unfortunate because they seemed like two sweet people and her being pregnant is not a great time for a split!

Good luck to all the celebrity mommies!
at 8:22 AM