In theory, if you want to know about what's hot in fashion right now, I've always thought you should look to what the girls 16-24 are wearing.  Forget what's on the runway because most of the times the celebrities can't even pull those looks off and they look like they should be in a Tim Burton movie.  Of course if you live in small towns, you can't look to the girls in the age bracket mentioned because they try to dress like each other and have no good looks to model after.  So, the next best option is watching current film and television shows with girls these ages. 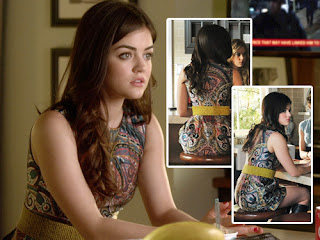 The fashion sense from the girls of Pretty Little Liars never fails to impress. Whether it’s during a fashion show, Masquerade Ball or for Halloween the girls are always dressed to impress.My favorite looks from season two were the simply, yet extremely girly looks.  For example, much of what Aria and Hanna wear are looks that I like.  I'm a big fan of simple and cute.  Mostly the looks they wear to school are somewhat the kind of looks I would like to go for at work.  Although their going out attire might be a little flashier than mine (I don't think I could ever pull off anything with glitter or sequins) I definitely like skirts and dresses.

Which character's fashion in Season 2 did you like best?  Which is most similar to your own?

Don't forget that Season 2 is now available on DVD!!!   And the new season of Pretty Little Liars is now in full swing on ABC Family Tuesdays at 8/7c.

"I have been hired by Warner Bros WBWord division to raise awareness for Pretty Little Liars."
at 8:57 AM