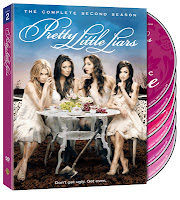 When the first season of Pretty Little Liars aired, I was hooked!  I had my DVR programmed and it was one of my favorite shows of the week.  I love stories about high school girl drama because thankfully- I'm not the one going through it!

The show revolves around a group of friends whose Alpha friend goes missing one night while the girls are all having some kind of sleepover/get together.  Her name is Alison.  One year later, the girls aren't close friends anymore and Alison's body is discovered, but "no one" knows what happened to it.  Throughout season one, the girls keep getting texts from an anonymous "A" and she seems to know all of their secrets and threatens to expose them if they don't do what she asks.  And believe me, they all have some juicy ones!!

My favorite was Aria- her secret was an affair she was having with her high school English teacher- who she didn't know was her teacher when they first met... so juicy!

And of course season one ended with a cliffhanger, which left me dying for season two to be released.  Of course, I've seen it, but if you haven't and you're dying to know what happened too, here's your chance because you can own Pretty Little Liars Season 2 on DVD now!!!
In the Season 2 finale we finally find out who the mysterious character is that plagued the Little Liars since Season 1. Who did you think ‘A’ was? What were some of the clues that led you to believe this? Can you reference the particular moment or scene which brought you to these conclusions?  I was suspicious of everyone and season one left me with no answers.  When we found out in season 2's finale who it "actually" was (I won't give it away in case you haven't seen it) I still found myself a little skeptical that although she had been doing many of the deeds, it seemed like there might have been someone else pulling her puppet strings.  I think season three will bring new twists that make us wonder if there was a different 'A.'
In anticipation of the release of Pretty Little Liars: The Complete Second Season on DVD there will be an online promotion which will entail video clips from the second season. The challenge will be to guess who said specific lines or to find hidden characters from within the season for a chance to win Heather Belle Bags, Accessories and DVDs Signed By The Cast. This promotion ends June 12.

"I have been hired by Warner Bros WBWord division to raise awareness for Pretty Little Liars."
at 8:42 PM