The Complete Fifth and Final Season of "Chuck" is Available Tomorrow on DVD and Blu-ray!!! 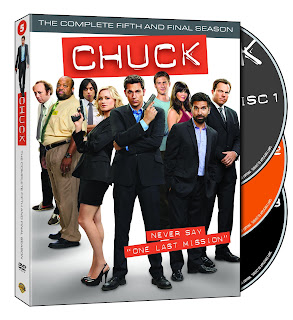 A hit among hardcore fans, Chuck has seen a great following, but unfortunately came to an end in January.  The final season comes out on DVD and Blu-ray May 8.
In ‘Chuck Versus the Santa Suit’ it’s Christmas at the Buy More. Chuck’s sister Ellie is in full Christmas mode, meanwhile the Omen virus has infected computers worldwide. The virus causes holiday shoppers to panic and things get a little out of control. Please share with your readers about a similar holiday experience were things went awry. Were the crowds as nutty as they were at the Buy More?
I'm one of those people that avoids crowds when at all possible.  I couldn't tell you the last time I've been to a Black Friday sale (I'll take Cyber Monday anyday!)  One thing I do get a kick out of, however is reading each year about what kind of mayhem has happened across the country at different Black Friday events.  I think last year was the year that I heard someone was tased by a fellow shopper.  I recall one year hearing about an unfortunate man that was trampled to death during a Black Friday rush!  People have been known to fight when trying to get to a hot ticket item and when the shelves are running low, it's like a blood sport!  So although I can't say personally that my holiday shopping experience has ever gone as wacky as what happened in the Buy More episode, I don't find it hard to believe that these things can happen!!!
This week be sure to stop by the WB Shop and use promo code c5wbwrd to receive 20% off + free shipping!!!

"I have been hired by Warner Bros WBWord division to raise awareness for 'Chuck.'"
at 7:31 AM