Did you know that V Season 2 is now available on DVD and Blu-ray??? 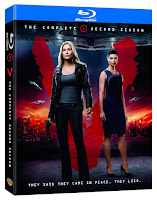 "In the series finale, the 5th Column is crushed in a failed coup against Anna. A new human opposition force has entered the picture called Aries Project. All humans above ground are blissed and fall under Anna's spell just as the V Armada approaches. An evil twin Lisa has been created who seduces Tyler, becomes impregnated by him and then murders him. Lisa the Visitor Princess is imprisoned after an attack on her Mother's life and Anna kills her mother Diana. If you were to write the next episode, where would you take the story? Would the humans triumph and crush the Vs, would the humans and Vs learn to live peacefully together or is it doomsday for humanity?"
If I were to write the next episode, I would like to see humans and Vs living together, although I don't know if it would be completely peacefully because then there wouldn't be as much drama.  I think there should still be some evil Vs and also humans who refuse to accept the Vs presence on earth.  I would like to see Vs and humans learn to live together and perhaps even be able to maintain romantic relationships.  There are so many directions you could go with these ideas!
“I have been hired by Warner Bros. WBWord division to promote V Season Two on DVD."
at 12:00 PM