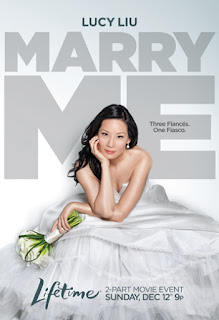 I am a Lifetime movie junkie.  Watching sappy stories about love gone awry and then new love springing eternal makes me weep.  Stalkers, road rage, you name it, Lifetime has it!

Marry Me stars Lucy Liu and is about Rae, a woman who has given up on the idea of finding true love, only to have the man of her dreams... and her ex propose!  And Rae wants a dream relationship.  A man who is in love and in love with the idea in love, who only has eyes for her, who is reliable, stable, sensible... at least, that's what she has always told herself she wanted!

Rae is surrounded by interesting people, including her zany adoptive mother (Annie Potts), Immy, a ward of the state and her nosy coworkers and family.


I was pleasantly surprised by this movie!  It is a 2 part mini-series and it held my interest the entire time!  I laughed, I was jealous, I was envious, I resented Rae, I became bitter.... um, I mean, what a wonderful love story!  Albeit predictable, I still wanted to watch it right up until the end!  The casting was PERFECT!!!  I have to point out that I especially appreciated when Immy (played by Vanessa Marano) made a quib about their relationship being like the "Gilmore Girls" because INDEED I REMEMBERED that she played Luke's daughter in the final seasons of "Gilmore Girls."  Well played, writers!!

Anyway, this premieres on Dec. 12 and is a two night event ending Dec. 13, airing at 9pm ET/PT both nights.  Awesome to watch alone or cuddling on the couch with a guy who isn't afraid to admit he watches Lifetime!