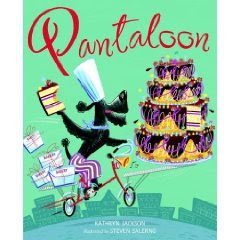 Pantaloon is a dog that loves baked goods. One day the chef at the bakery realizes he is overwhelmed and puts a "help wanted" sign in the window. Pantaloon decides to offer his services. The chef rejects him because he believe Pantaloon will just eat all his food. After trying a disguise and attempting to think of alternate ways to get hired, Pantaloon is saddened when the chef gets injured tripping over his bike. Feeling guilty, Pantaloon bakes and delivers all of the chefs orders. He then retreats to his house in despair because the chef is still mad at him. Upon returning to work, the chef realizes that Pantaloon was actually a big help and that he has even more customers than before! He realizes he was too harsh on Pantaloon and bakes him a big cake to entice him into coming back.

My 4 year old liked this book. My 2 year old lasted about 30 seconds. I didn't like it myself. I thought that it was not very conducive to learning for young kids. First, the dog's name is not something easily recognizable to children. Secondly, I think the message is kind of lost as well. It's too advanced for younger kids to be read to and by the time the older kids can read those words, they won't like the story. On a plus side, though, the illustrations by Steven Salerno were very well done.

Pantaloon by Kathryn Jackson hits the shelves March 9!!!
at 1:06 PM