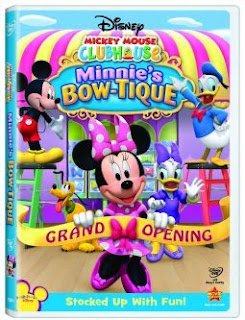 After the reaction my son had the first time he saw Mickey Mouse Clubhouse, I have become a loyal fan! Therefore, any DVD that comes out is a must have!

It's the grand opening of Minnie's Bow-tique, a store jam-packed with every kind of bow and bow-tie imaginable. The selections include: the "Glow-Bow", a bow that changes color with every mood; the "Grow-Bow", a bow that grows to tremendous size by just adding water; flying "Butterfly-Bows"; and a "Photo-Bow" that snaps instant pictures. Problems arise when Pete, embarrassed about buying a lady's bow for his favorite aunt, causes a few accidental mishaps in the new store. However, super salesperson Minnie finds the perfect bow for Pete. The Bow-tique's grand opening
is a success - and it all ends in a Big Bow Show with the Clubhouse gang modeling the latest fashions under the biggest bow of all, a colorful, sky-high Rain-Bow.
In a never-before-seen episode, Minnie’s Pajama Party Minnie and the girls set up a fun Pajama Party sleepover for the day – but it’s not as easy as it sounds, especially with the addition of Pete and Willie the Giant!"


If you're unfamiliar with Mickey Mouse Clubhouse, it's one of the staples on Playhouse Disney and is geared towards toddlers and preschoolers. Both my kids love it. I think it's very educational. Kids learn letters, numbers, colors, vocabulary, but don't realize it because the show is so fun!

Family Time Factor: Probably best enjoyed by kids 6 and under. Not terrible to watch as a parent, but I'd much rather be cleaning, lol.