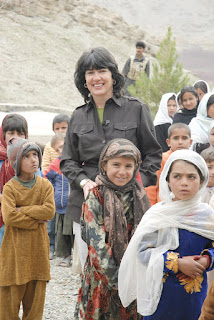 Christiane Amanpour is a well known, chief international correspondent for CNN who has never been afraid to face hard hitting stories that make people think and capture the world's attention.

On Thursday, August 13 at 9 pm and 12 am ET and PT, Amanpour's newest documentary airs on CNN and is entitled Generation Islam.

The purpose of this documentary is to highlight the troubles that the youth are facing in the Muslim communities of Afghanistan, Pakistan and Gaza. They must deal with avoiding death as accidental casualties of war, warding off the manipulations of extremist groups and also struggling with the identity of the faces of the Muslim culture. You meet several families and youth and find out about their harrowing experiences in life and how the war has impacted them. Some have lost their entire families and must now figure out how to carry on with their lives.

The plight of other countries that are not our own always touch my heart. Be it movies like Hotel Rwanda or documentaries such as this, it is tough to know that here I am sitting in air conditioning, with plenty of food, my family, entertainment while there are so many people out there fighting just to live through the day. I appreciate that Amanpour traveled to these countries and risked her own life in order to let us know what is happening there.

I also love that documentaries like this make you think. And thinking is never a bad thing. I highly recommend that people watch this in order to understand what kind of things are going on in the Middle East.

Family Time Factor: Not for young children, but definitely worth having your middle school aged or older children watch with you so that they can become more knowledgeable about the world around them.