My Thoughts On: Southern Belles: Louisville 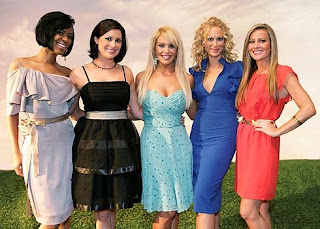 Not sure how many people are familiar with this show. It airs Thursday night on Soapnet. (I'm sure you are all avid Soapnet watchers, lol.) Anyway, the season finale is next week and I have a few thoughts on some of these girls.

Hadley: The only character that I truly like. She's cute, funny and easy to relate to. She is a 9-5 type girl who hopes to get a career she's proud of, while trying to figure out the relationship situation in her life. Russell, her BFF that she is now dating is kind of a scumbag, but she can't decide if he's the man for her or not (I say he's NOT.)

Kellie: Twice divorced, all she talks about is how much she wants a child of her own. BUT, GET THIS- she's dating (and maybe movie to Chicago with) some guy who has made it SO CLEAR he does not want more children. And her response, "maybe he'll change his mind." WHAT?! If your dream in life is to have kids, DO NOT commit to a guy who says up front that he does not. Especially if he knows that is your one goal in life.

Shea: My least favorite of the bunch, she is a spoiled rich daddy's girl. This poor guy Jeff is unfortunately the man who thinks he wants to marry her. First, she tells him she will only take a ring that costs like 200,000 dollars. (Clue one to hit the road and never look back- if a girl is telling you she will only accept a ring that expensive, she doesn't deserve one.) She's clingy, pushy, bossy and a prude. I have yet to see what good things she brings to anyone's lives. The last episode she has told her fiance that they are buying a condo and he has his heart set on a house. I think since he will be the breadwinner and she's gonna make his life hell, he should get to pick a house. I can't stand this chick.

Julie: Not much to say about Julie. She's a model, but isn't real exciting. She's desperate for love, marriage and a family, but is not having much luck.

Emily: Oh my gosh... the hair... the makeup. Her hair is SO FRIED. All I can do is stare. And her clothes and makeup are so garish as well. It's horrifying. Other than complaining and whining a lot, there's not much to her either. She wants to be a big tv host and is contemplating moving for good to Las Vegas to take a full time job on a web tv station. But the hair... the makeup... aaaaaaaah!

Anyway, this show is a guilty pleasure of mine (among the hundreds) and I thought I'd put my two cents in on what I thought about it... cause... like I have room to judge, lol. Anyone else watch this show?