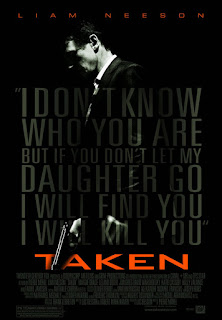 I was excited when I saw the trailers for Taken as it looked like one of those "action" movies that I might actually be able to tolerate! And it did not fail to deliver. There was only one problem I had with the movie and I will share that later.

Taken is about Bryan Mills(Liam Neeson), a man who has previous experience as some sort of secret government agent. He has a 17 year old daughter named Kim (Maggie Grace) who has become a bit distant from him since his divorce from his wife Lenore when Kim was young. He has decided to retire and move to Los Angeles in order to form a better bond with her. Life of retirement is not all that exciting, but he would do anything for his daughter.

When his daughter and wife spring the idea of Kim going with a friend to stay in Paris for the summer, Bryan is not happy at all. He has become paranoid over his years of service and knows what kind of danger is out there. But, in an effort to keep his daughter happy, Bryan consents. He must sign a form allowing her to leave the country, otherwise the choice would not have been there for him.

And surprise, surprise, in the biggest form of "I told you so" I've ever seen, the first day Kim is in Paris, she and her friend Amanda (played by Katie Cassidy- David Cassidy's daughter) are kidnapped by traffickers. Kim happens to be on the phone with her dad when the kidnappers come and he heads to Paris to try to save her.

This movie was fantastic! It was well written, well acted and kept my attention from the word go. I'm usually not a fan of action movies, but since I loved seeing a dad whoop up on some people in order to save his daughter, I watched each scene gleefully.

The ONLY downfall to this movie was that Lenore (the ex wife) didn't get punched in the face- not once! He didn't say "I told you so" or anything! That woman deserved a beat down like none other!

Family Time Factor: It is something that could be enjoyed by teenagers and up, by males and females.