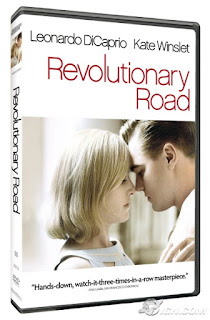 Kate Winslet and Leonardo DiCaprio have teamed up for a second time for Revolutionary Road. Based on the novel by Richard Yates, the movie focuses on a married couple named Frank and April. They had hopes, dreams, got married, had kissed, moved to suburbia and surprise, surprise, realized their lives were boring and cookie cutter. I believe the film takes place in the fifties.

April had dreams of being a famous actress, but finds herself stuck as a stay at home mom with no promising future in sight. Frank is in a job that he hates and is not appreciated for and longs for more in life. After a particularly heated argument, Frank cheats on April. She welcomes him back and they go back to their mundane existence. Both realize that they are in that trap that many couples find themselves in. They struggle to accept an existence that neither of them really want.

I think I could have loved this movie. I say could have, because I think it was a tad long and drawn out. Plus, for some reason they said Frank and April to each other a billion times too many and it drove me nuts.

But what I did love is how true this movie is! I mean, how many couples feel that they settled for the life that was expected of them? Being married, having kids, that's what society tells you that life is about. April hated this and wanted to break free of the mold. I really liked her character. Frank was quite a tool and I wanted to smack him in the face, but that will happen. There were so many aspects of April's life that I could relate to and that is a great element to have in a movie!

Family Time Factor: This is more of a date night movie. It is not suitable for younger children due to a lot of profanity and some very adult issues. I suggest you don't watch it if you're married and your marriage is no good.

Oh, and if you're curious, it's called Revolutionary Road because that is the name of the street they live on.