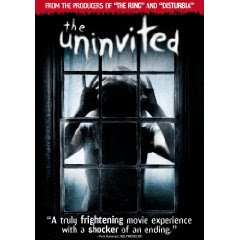 First thing I noticed about The Uninvited was all the familiar faces. And of course I have to figure out where I've seen everyone or it drives me nuts! Anna is played by Emily Browning, who is best known from A Series of Unfortunate Events. Elizabeth Banks plays Rachel, the former nurse of Anna's mother, who is now her father's girlfriend. Banks has been quite busy lately and has recently starred in Role Models and Zack and Miri. Alex, Anna's sister, was played by Arielle Kebbel. She was the biggest challenge to recall, but you MAY remember her from John Tucker Must Die. And finally, the dad was played by David Straithairn, who was most recently in The Spiderwick Chronicles and The Bourne Ultimatum, but I instantly recognized him as Keith from one of my faves, Big Girls Don't Cry... They Get Even from 1992.

Okay, now that we've got that business out of the way, let me say that this movie was AWESOME! I have been DYING for a good horror/thriller as that and comedy are my faves, and this movie delivered in spades.

Anna has been recently institutionalized after her ailing mother died tragically in a fire. Upon being released, Anna finds out that her father is shacking up with the nurse that took care of her mother. Anna does not like this one bit. In therapy, she admits that she saw what happened the night of the fire, but can't remember. Through dreams, Anna is visited by ghosts (yes, she sees dead people) that help her piece together what happened.

I was alerted ahead of time that the ending rocked, which made me question everything! But it did no good, because the ending has such a great twist that you'll never guess, so don't even try. Plus, why spoil the surprise? I was blown away and I loved it!

Family Time Factor: We actually watched this as a family. There was nothing really inappropriate to it and it was no more graphic than what you'd see on TV. If your child are easily frightened or going through a "boogeyman" phase, don't let them watch, but if your kids aren't sensitive to gore or dead people, they'll be fine.

The Uninvited will be available to own on DVD and Blu Ray April 28!
at 8:54 PM