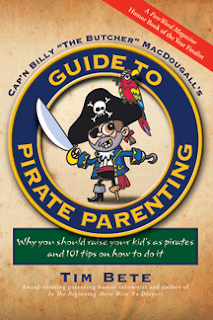 Ever wondered how pirates raise their kids?

Now you don't have to! Cap'n Billy "The Butcher" MacDougall has allowed his story and theories behind the practice of parenting like a pirate to be told in this new book from author Tim Bete. Bete is an award winning parenting humor columnist and author of In the Beginning There Were No Diapers.

This guide makes it easy for any boring land lover to flip their lifestyle upside down to become true pirates and raise their family as such. You'll learn the benefits of being a pirate and why it's okay to have a messy house, stinky children and dirty clothes. (Cause who cares? You're a pirate!)

As Bete relays in the story, men are more prone to read this book, get to about the second chapter and realize that pirate parenting is for them. Women, however are a little harder to win-over. (He compares it to telling women that you should dust with a leaf blower.) However, he dares to believe that even women will be converting their minivan into a pirate schooner before long!

This book had several parts that had me laughing out loud. It does seem like a nice idea to relieve the stress of normal parenting by just converting to the pirate lifestyle. Unfortunately, I was not sold on the idea by the end of the book.

I love Tim Bete's witty and humorous approach to the diversity of parenting styles and his tongue in cheek attitude.

The layout provides for a quick and easy read, along with quizzes throughout that let you test your progress on becoming a true pirate parent.