My Thoughts On: American Idol 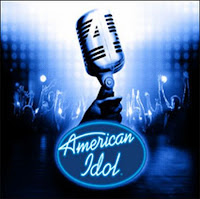 Last season (I have no idea what season they're on) was the first season of American Idol I watched from beginning to end. Usually I watched the auditions and then gave up. And that was just because I wanted to see where "The Soup" clips were coming from. Anyway, I ended up liking many of the people, so watched the whole season and was SO GLAD (in a non-caring kind of way) that it was David Cook and not Archuletta- he annoyed me quite a bit. He reminded me of a Monchichi.

Anyway, this season I like quite a few people, but they haven't made it into the finals. Last night, I was accurate when I predicted it would be Lil Rounds, Jorge and Scott. But, I liked Ju'Not (probably butchering lots of names here) and Felicia. Plus Taylor Vaifanua lived in my town and I was in a class with her at middle school. (Long story, I was a 1:1 aide with a kid in her class.)

So, I was right in my predictions, but sad to see some didn't get into the wild card round. Of the wild cards, I like Megan Corkrey, Tatiana (come on, she REALLY needs it for her sanity) and no one else stuck out for me. I DO NOT like Von Smith. There were several that didn't make it that I liked, like the blonde girl from the third night- I think her name was Kristen... and I also was not impressed with Anoop.

Anyway, I just thought I'd share a few of my thoughts on American Idol. I do like new idol judge Kara and still think that Paula needs to cut back on the meds cause she sounds drunk every night and is quite confused. I don't know if she's on painkillers or what, but scale back, Lady!
at 1:21 PM